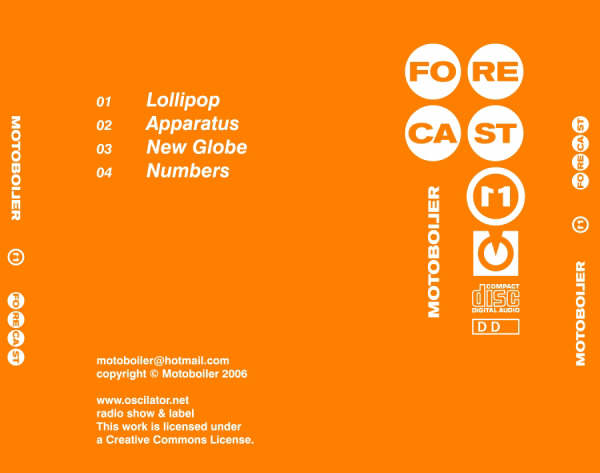 Here is another fine Oscilator release for 2006. I am talking about Motoboiler, Bosnian producer, and his ep Forecast. This is a more laidback release from our previous one, and if you are ready for some retro-electro sounds, with a few trance sounding lines you are ready for this guy!

Reviewer: gratisvibes.com - favoritefavoritefavoritefavorite - November 21, 2006
Subject: Reviewed on Gratisvibes.com
Iâm not usually a trance person but I find this album is kind of unique in its own way. Even though there are only 4 tracks in this album, they are generally good tracks in my opinion. Each of them carries a rather distinctive tone and mood from one another and by listening to the tracks in sequence, one canât help but feel like watching an action movie.

Even though the beats are not fast, I personally feel that these songs make good background music for action scenes in movies. Unlike some of the techno/track songs that I usually hear on the radio or in clubs, these tracks do not feel repetitive at all. However, although being categorised as trance & techno album, the tracks in Forecast EP arenât very dancable. I would say that probably is because of its dramatic âaction-packedâ melody.

All in all, I find that this release is quite unique in its own way. Youâll have to give it a listen regardless of whether you are into techno/trance or not.